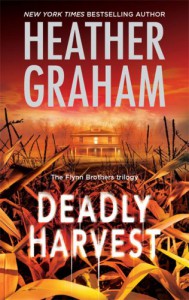 I very much enjoyed this book, so much so, that every time I tried to put it down yesterday, I found myself picking it back up again in a matter of moments. It was nicely creepy, with just the right amount of romance and nice characters.

I did figure out one aspect of the mystery early on, but the author still managed to surprise me with another aspect. And I know that's vague, but I don't feel like using spoiler tags right now.

One thing that was a little jarring was the fact that the author tended to switch scenes with absolutely no warning. One sentence, we'd be with one set of characters in one location and in the very next at a new location with different characters. It was a little distracting and would pull me out of the book, because I'd have to go back and reread to make sure I was following what happened. A divider or separation of some kind between the scenes would have helped tremendously.

That, however, was a minor annoyance, and I'm looking forward to reading the other two in this trilogy.