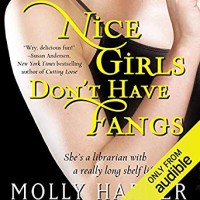 This was an amusing and cute book. I'm not sure, though, if I'd read it in print form that the humor would have had me rolling my eyes a bit. I think I might have found it a bit over the top (as I do with the Charley Davidson books) at times.

Amanda Ronconi's narration, however, had me laughing out loud more than once. She has fantastic way of delivering lines and a wealth of accents to go along with it. She's been a favorite of mine since I listened to the first Haunted Guesthouse book.

I really liked Jane as a character for the most part, and I wish we'd gotten to know more about her sire, Gabriel, especially since he appears to be her love interest. I also really liked Jane's best friend, Zeb and his fiancee Jolene. I found Dick Cheney (seriously, that's his name) to be a bit much at times, but overall, he was okay.

I'm debating on whether to go further in the series or not. Things were left with a sort of HFN resolution, and I am somewhat curious about where the story goes next. I've put the next in the series on my wishlist at audible, so I'll probably eventually get it.