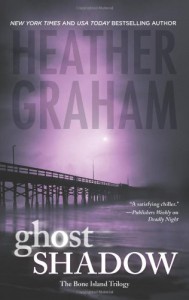 This was slightly better than okay. The characters had little development, the dialogue was kind of odd, the romance was of the Insta variety, and the villain's motive was ridiculous.

Now for the things that make it slightly better than okay:

The setting: Key West was almost like a character in its own right. I've not read many (if any) books set in the Florida Keys before, so it was a nice change of pace. I enjoyed learning a bit about the history of the Keys. Though, I had already heard of The Otto family/Robert the doll, and Carl Tanzler/Elena Milagro de Hoyos before.

The Ghosts: Bartholomew, in particular. I loved him. He was funny and lovable, and I'd love to read an entire book just about his adventures in the afterlife. (I know there's a prequel novella that focuses on Bartholomew, but it's more the events that lead up to his death.)

The premise of this book was a good one, but the execution was lacking. There were some slightly creepy moments, but the stilted dialogue and the villain's motive really drug the whole thing down.

Oh...and I didn't really buy into the romance between the leads, either.