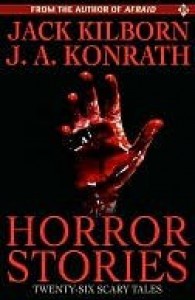 This is a collection of horror shorts written by author Jack Kilbourn (aka JA Konrath). Some were included in various anthologies, horror magazines, and the like, some were submissions that were never published until this collection.

I arrived at my star rating by assigning each story it's own star rating, and then averaging them out. About half the stories I rated two or lower, meaning they just weren't my cuppa, they were way too short to be really interesting, or something like that. Nine of them I rated three, which meant I found them enjoyable enough, but wished they'd maybe been a bit longer so that they could have been fleshed out a bit more.

Three of the stories got a four or above rating, and they are as follows:

Forgiveness: A young priest is called to hear a dying serial killer's confession. Really creepy! I rated it a four.

S.A.: (Stands for Shapeshifters Anonymous) A group of shapeshifters doing battle against Santa Claus--yes, Santa Claus. This one was just great fun, and I rated it a five.

Note: Some of these stories are quite gory and graphic, so if that's not something for you, you may want to skip this volume. A couple could also be quite triggering--which I will put under a spoiler cut--

I found them both truly disturbing. The author did give warnings as to them containing disturbing subject matter, but didn't specify what, so I thought I'd pass it along in case someone reading this would feel the need to skip over those stories.